WHY A REFINED FRENCH BULLDOG BECAME TIMID AND FRIGHTENED

Bentley watches people like a “king would watch over his subjects”. He tells me he ‘goes to work’ and travels around. Bentley is intelligent and enjoys being the centre of attention. At two years old he’s already like a wise old man (with status). Someone you could pour your troubles out to and he’d listen.

Bentley likes walking at the beach and looking at the boats, but from the promenade (not interested in the sand or water). He also enjoys the smells of cooking. If Bentley were human, he would have epicurean taste buds. He enjoyed the beer he got as a treat and says “He’s not allowed to have yogurt”.

There is one female he’s drawn to – she seems to need his calming energy. This woman isn’t around him all the time but she’s emotional and can be withdrawn. Bentley understands her well and gives me the feeling of ‘simpatico’.

(Trish – Bentley’s human – confirmed all the above)

• now scared travelling around in the work van
• became timid last year after Trish and her son, Josh, went away (Bentley was looked after by someone else)

• Does he like classical music?
• How does he see his relationship with Trish and Josh?

SCARED IN THE VAN
Bentley was in the van when the sliding door “slammed shut”. It scared him, he felt trapped.

WHEN WE WENT AWAY
Bentley was in a room full of people he didn’t know, was ‘under foot’ and got accidentally bumped around. It made him very anxious

DOG NEXT DOOR
Bentley would like to make friends – but the other dog is a bit antagonistic. Bentley is also trying to protect your property. The other dog doesn’t get as much attention as he would like. He sees Bentley trotting around enjoying himself and wants the same thing.

OTHER DOGS
Bentley has had a scare with larger dogs – one in particular, in a park. Now when he sees a dog that resembles the other one, his attitude is “I’m going to get you before you get me”. Bentley’s ready to pounce!

CLASSICAL MUSIC
Bentley likes Mozart (Trish confirmed that she plays it all the time).

RELATIONSHIP WITH TRISH AND JOSH
His relationship to Josh is that of a “big brother”. Trish is like a Mum, the primary person in his life (even though he’s Josh’s dog). Bentley enjoys the attention he gets from both and feels like their home is also his home.

MESSAGE FOR JOSH, TRISH’S SON
Bentley explained that Josh says “Yes, yes, Bentley, I know you’re there” but Bentley still doesn’t get the attention he would like. (Josh replied: “That’s EXACTLY the phrase I use with Bentley”)

Trish has purchased the toy Bentley wanted and he was so excited to get it. He doesn’t bark so much at the neighbours’ dog, like before.
Trish feels great comfort knowing how settled Bentley is and to now understand why he acts the way he does in situations that were causing her to be anxious. Generally, she thinks Bentley is calmer after speaking with Faye and doesn’t get so obsessive with things. Her son said when he walks him now he’s so calm and not pulling on the lead, more relaxed. 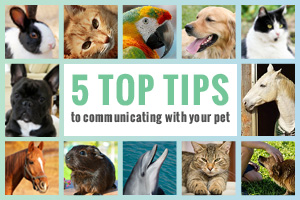